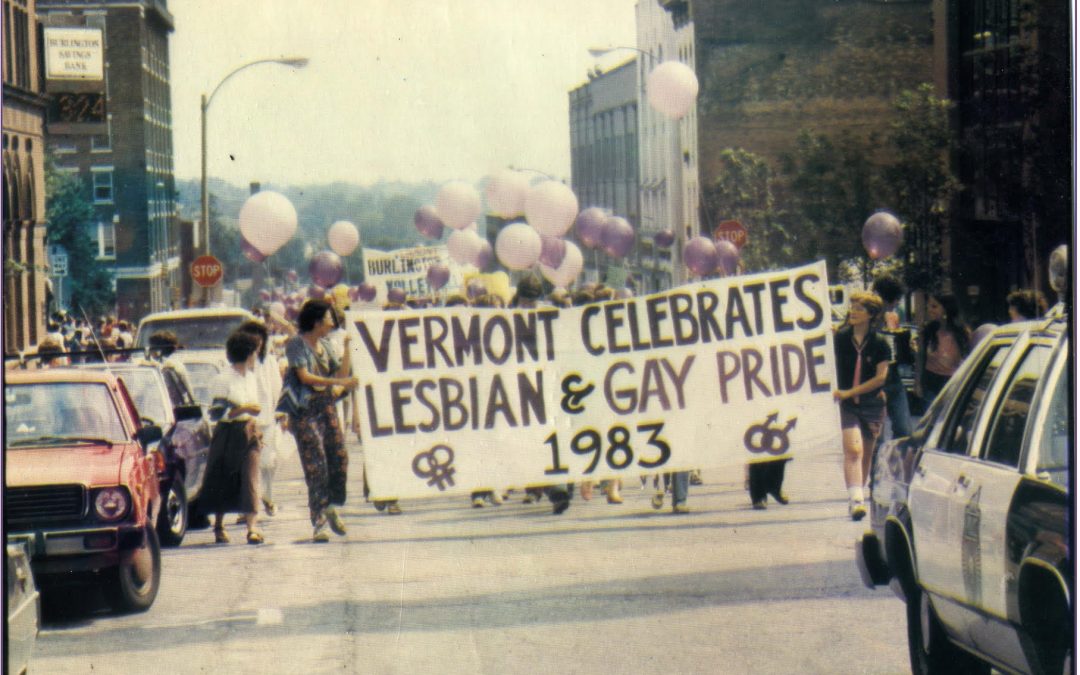 Burlington, Vt. – The Vermont Division for Historic Preservation is set to unveil its 300th Roadside Historic Site Marker which denotes the first Vermont Lesbian and Gay Pride Parade, which took place in 1983. The marker will permanently commemorate the courage of the original parade marchers and will honor the significance of the many in the State who have sustained Vermont’s ongoing Pride movement.

“We are proud that the Roadside Historic Site Marker Program can be used to recognize and celebrate the courage of those who marched in 1983 and the significance of the LGBTQ+ movement,” said Laura V. Trieschmann, State Historic Preservation Officer. “As Vermonters, it is important to not only honor our history but also to understand and respect significant events of our recent past.”

With public celebration of Pride controversial in the Green Mountain State, Vermonters joined marches in larger cities across the nation where it was safe to be visible commemorating the Stonewall uprising of June 1969 in New York City, the beginning of the national LGBT Pride movement. In 1983, a group of lesbian feminists began planning the first Vermont Pride march and invited the gay male community to join. The rally on June 25, 1983, which was proclaimed as Lesbian and Gay Pride Day, was held in Burlington’s City Hall Park with a parade of more than 300 participants through the business district.

“Many of us had marched for Pride in large cities where we were anonymous, but in 1983 we decided, despite the many risks, to march and be visible in our home state,” said Leah Wittenberg, one of the founding members of the 1983 march in Burlington, and member of the first Pride historic marker committee. “I am so proud that we have a Vermont Roadside Historic Marker honoring the courage of the marchers on this historic day. It makes the roots of Vermont LGBTQ+ history accessible to so many who may not know the story, and most importantly, it is a visible reminder of our place in the history of Vermont.”

In its 75th year, the Roadside Historic Site Marker Program, established in 1947 by the Vermont General Assembly, has proven an effective way to commemorate Vermont’s many people, events, and places of regional, statewide, or national significance. The Burlington Pride Parade Marker will be the third LGBTQ+ historic marker in Vermont. To see a complete listing and a searchable interactive map of all the Roadside Historic Site Markers in Vermont, visit the Division for Historic Preservation website.

“The Marker Program provides a way to tell the many stories of our history that are often known just locally or are largely forgotten,” said Trieschmann. “Vermont’s earliest markers focused largely on nationally recognized people and places. In more recent years the program has sought to install markers that support a more inclusive and diverse approach, whether it be 13,000 years ago or 39 years ago.”

The Pride Center of Vermont is sponsoring celebratory events and an unveiling of the historic marker during the Pride 1983 Historic Marker Commemoration at City Hall Park, in Burlington, on Sunday, June 26 at 2:00 pm. Media and the public are welcome to attend.

About the Vermont Agency of Commerce and Community Development