Neurodivergence in the LGBTQ+ Community 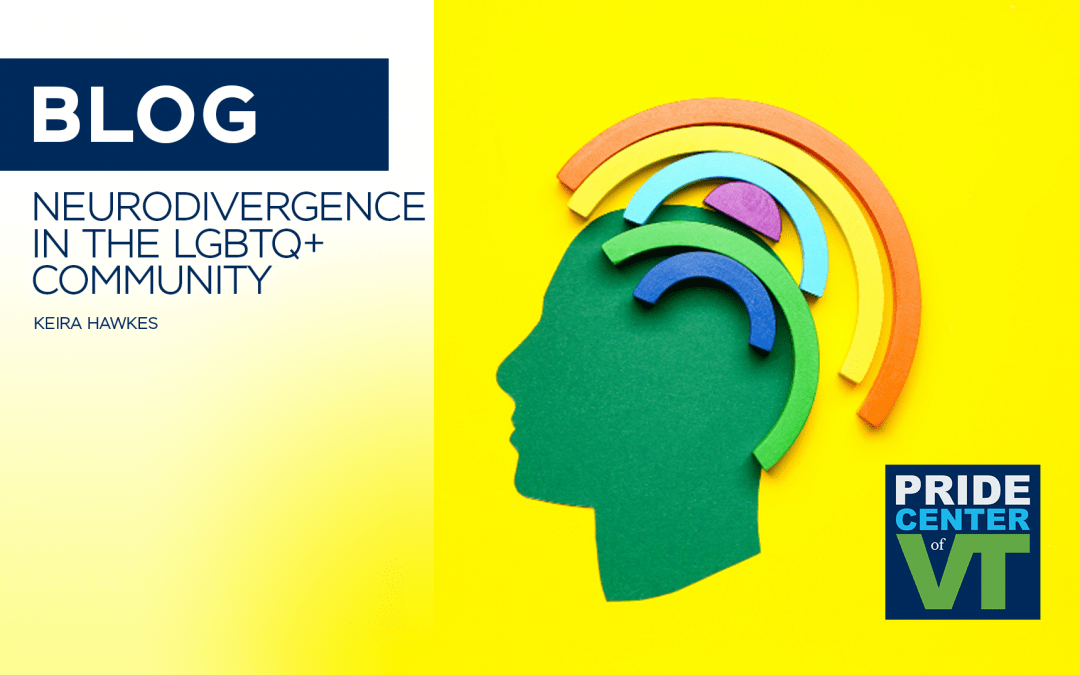 The term “neurodivergence” describes a wide range of experiences and variations in social communication, learning styles, attention capacity, and other brain functions. Some examples of neurodivergent diagnoses are Attention Deficit Hyperactivity Disorder (ADHD), Autism Spectrum Disorder (ASD), and dyslexia. Although many of these identities are considered disorders or conditions, neurodivergence isn’t something that needs to be “cured” or “fixed”; neurodivergence is just one of the many aspects that makes you, you! However, a diagnosis can be helpful in gaining access to tools which help to navigate a world that was not built for neurodivergent people.

Neurodivergence is more common in the LGBTQ+ community than it is among cisgender, heterosexual people. Why is that? Researchers theorize that, as neurodivergent people are less likely to adapt to social norms, they are more likely to question and explore their gender and/or sexual identities (1, 2, 3, 4). A 2018 study found that almost 70% of people with autism identify as “non-heterosexual” (1). A 2020 study of 247 women with autism found that only half of them reported being cisgender and only 8% of them reported being exclusively heterosexual (4). Another study found that  “people who do not identify with the sex they were assigned at birth are 3 to 6 times more likely to be autistic than cisgender people” (2). This study also found that gender diverse people were more likely to report autistic traits and suspect that they have undiagnosed autism.

Despite harmful misinformation about the “overdiagnosis” of certain neurodivergent identities (such as ADHD), the reality is the opposite for people in the LGBTQ+ community. Generally, LGBTQ+ people are less likely to get the health care they deserve and, because of this, are less likely to receive certain diagnoses and corresponding care. Cisgender women and AFAB people are chronically underdiagnosed when it comes to neurodivergence (5). Clinicians often misdiagnose Autism Spectrum Disorder (ASD) and ADHD as other conditions or behavior patterns in young, AFAB people. Diagnostic criteria are also not always inclusive of the ways neurodivergence can show up in people who are socialized as girls, as they often have a “quieter presentation” of traditional neurodivergent symptoms (5). Additionally, LGBTQ+ neurodivergent people experience discrimination related to their gender and/or sexual identity. According to a study from 2018, 70% of gender-diverse, autistic teenagers reported needing gender-affirming medical care, but 32% said that their gender identity had been questioned due to their autism diagnosis (3). Discrimination in the health care system as well as cissexist and sexist understandings of neurodivergence leave many queer neurodivergent people undiagnosed and/or unsupported.

Due to the many layers of financial, inaccessible, and discriminatory barriers that often prevent marginalized folks from receiving official diagnoses, the practice of self-diagnosing is generally considered an acceptable route for many to take; especially since the amount of neurodivergent support services specifically for adults is incredibly limited (6, 7). While self-identification isn’t enough support for everyone, for many folks, self-diagnosis empowers their understanding of themselves and makes it easier to seek out tools and resources to help them in daily life (6, 7).

A Guide for Queer Folks Who Just Learned They Have ADHD

Resources For Trans People On The Spectrum

Do you think you might be neurodivergent and would like to speak about it with a health care provider? Check out our list of LGBTQ+ safe and affirming psychiatrists and psychiatric nurse practitioners on our Vermont Diversity Health Project.