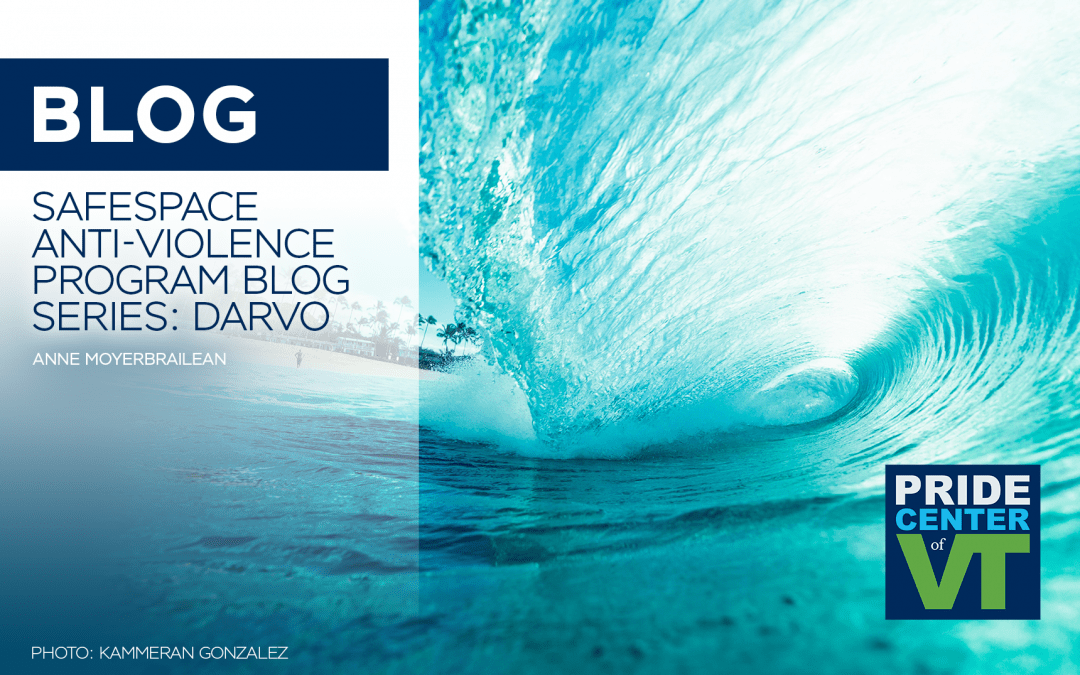 Many of us are familiar with the term “gaslighting” and “gaslighter” (thanks to The Chicks!). We have seen this abuse tactic play out in interpersonal relationships, media, and in politics. A related but rarely-discussed dynamic is DARVO, an acronym that stands for Deny, Attack, Reverse Victim and Offender. DARVO is an abuse tactic used by people who cause harm in order to minimize and silence people who have experienced harm. DARVO is a successful power and control tactic used by a manipulative partner to increase the self-blame and decrease the self-confidence of someone who they choose to harm.  Our SafeSpace Anti-Violence Program team created this info-graphic series to increase awareness in our communities around this abuse tactic. As always, if you would like to discuss how DARVO or other forms of abuse can show up in relationships, reach out to our team of SafeSpace advocates.

In your relationships – romantic, familial, work, etc. – you should feel safe talking to the other person about their action or behavior that feels hurtful, upsetting, or uncomfortable to you.  If you bring up your concern to the other person and they consistently tell you that you’re wrong or imagining things, they might be using denial as an abuse tactic.

“You’re making this up.”

“Don’t get so worked up. It was nothing.”

“Who would believe you? You’re crazy!”

“You will do anything to be the center of attention.”

“That organization is full of liars.”

“Anyone who believes you is seriously messed up.”

Attacking is used to further delegitimize any requests for accountability and minimize the credibility of the person experiencing harm.

Once the person who is causing harm has successfully denied the perceived attack (read: a request for accountability) and then attacked that person’s credibility, they will claim the role of the person who has been harmed and blame the other person for harming them. (It is important to remember that being upset when someone asks for accountability is not the same thing as experiencing harm.)

“I only acted that way because you made me.”

“That b*tch got me canceled.”

“I’m suffering a trial by the media/public opinion.”

NOTE: While the DARVO acronym coined by Jennifer Freyd uses the language of “victim” and “offender”, the SafeSpace program does not use this language when discussing harm. Instead, our program chooses to center the action rather than the person. For example, instead of saying “offender” we use the term “person who has caused harm.” We are intentional with our language for a couple of reasons: 1) Our program believes that no person is inherently wrong or bad, but that people can do harmful, destructive, and devastating things. 2) People who cause harm are oftentimes people who have been harmed. As Danielle Sered of Common Justice says, “No one enters violence for the first time having committed it.” At the SafeSpace Anti-Violence Program, we believe that by opening our language to allow for nuances surrounding incidents of harm, we also open up the possibilities for deeper healing and accountability for all involved.

At SafeSpace and the Pride Center of Vermont, we believe survivors of violence, harm, and abuse. We understand the many ways people who cause harm may manipulate and twist the story to make you doubt yourself. Our team is here as confidential* advocates who can help you process your experience, offer you resources, and connect you with additional supports.

*Our services are fully confidential among our team of SafeSpace advocates. We do not discuss or disclose your information to other community members or Pride Center Staff. If you have a question about confidentiality, you can always call us on our secure support line at (802) 863-0003. SafeSpace believes that no person is inherently wrong or bad, but we do believe in taking accountability for our actions when we cause harm.

If you have used this DARVO tactic in relationships and would like to speak with a confidential advocate about receiving support in taking accountability, advocates can be reached at (802) 863-0003.   If you would like to learn more about DARVO or other ways abuse can show up in relationships, reach out to our team of SafeSpace advocates: Support line: (802) 863-0003 Email: safespace@pridecentervt.org Chatline: pridecentervt.org/safespace

More resources: Video: DARVO | The Abuser’s tactic of blame-shifting that causes you to blame yourself for the abuse 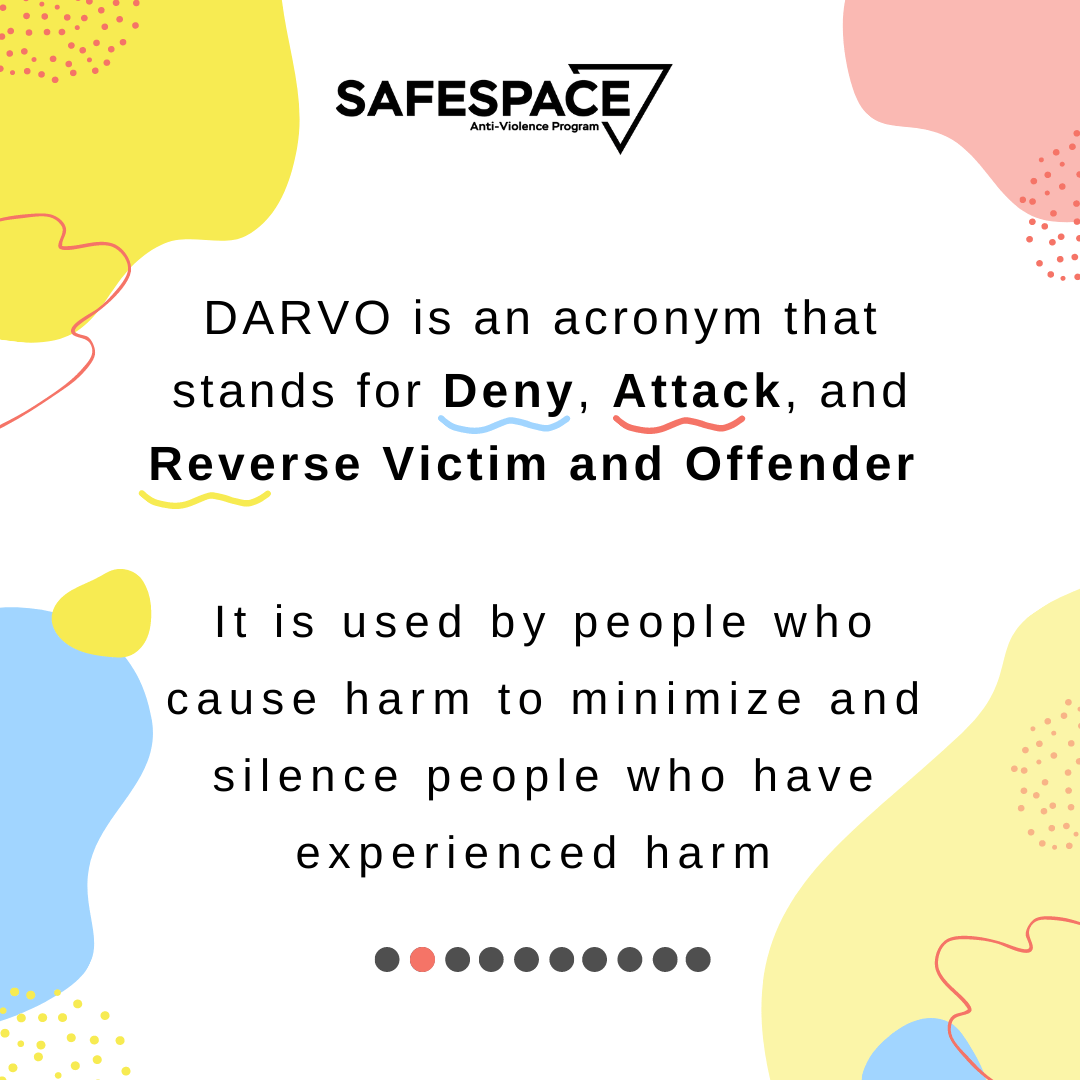 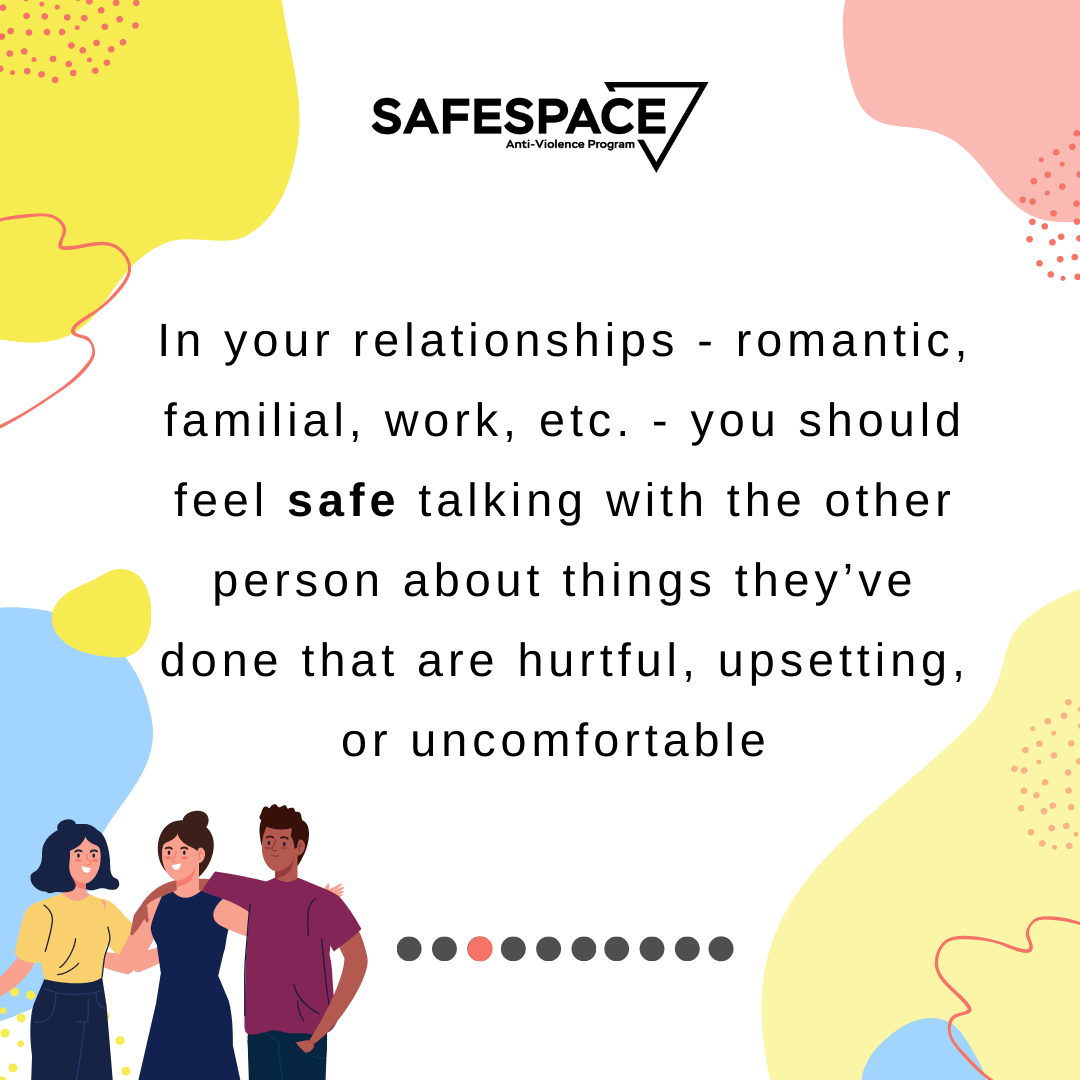 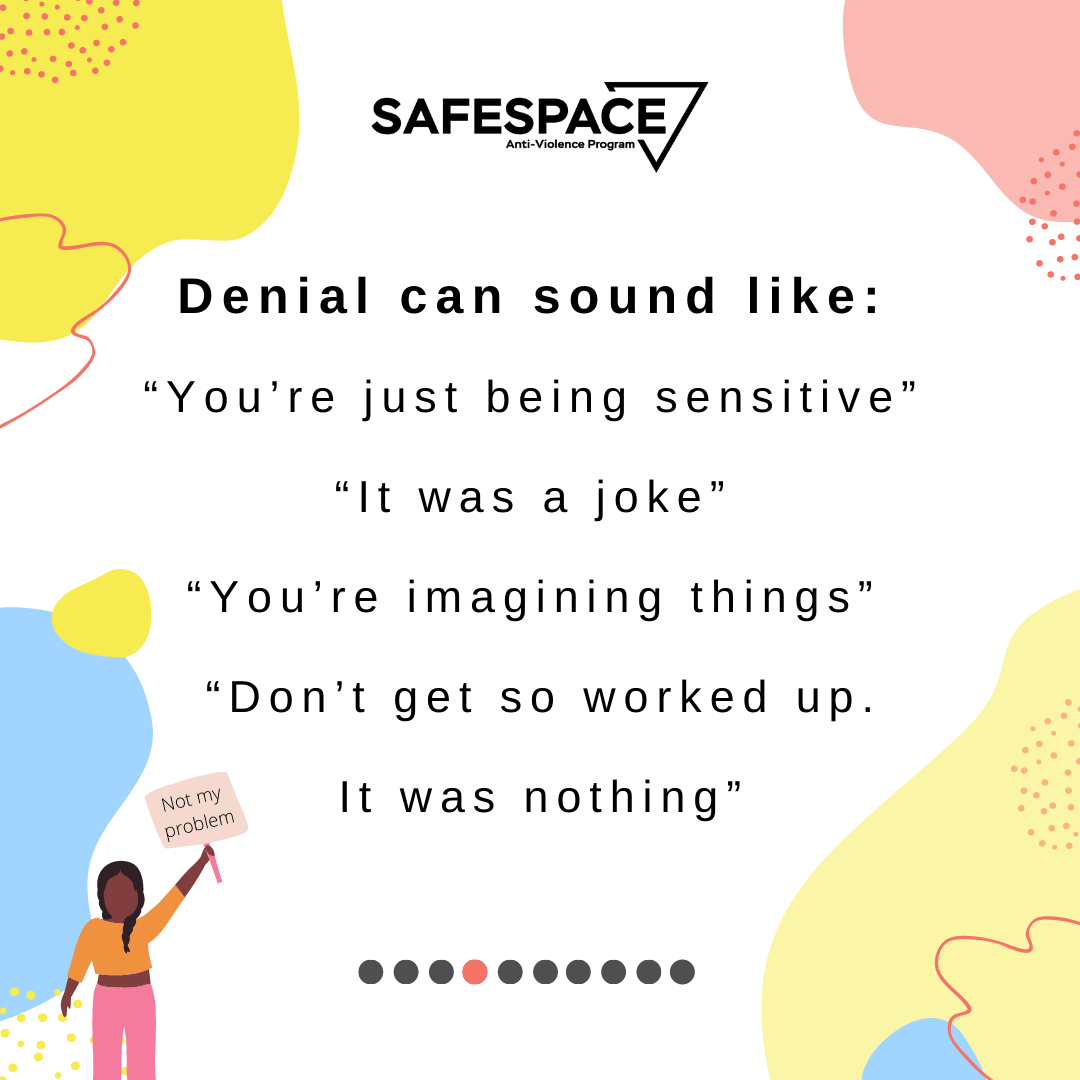 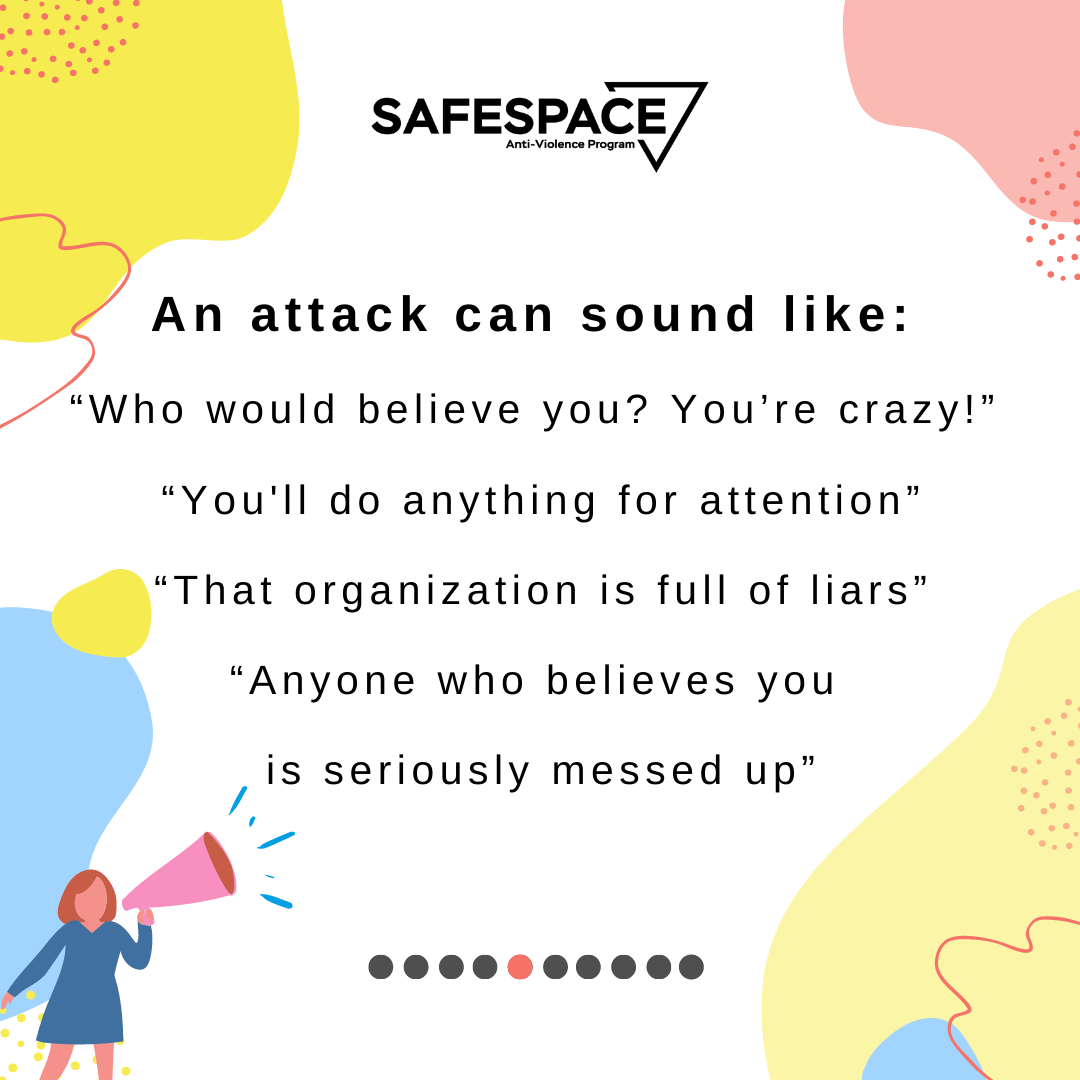 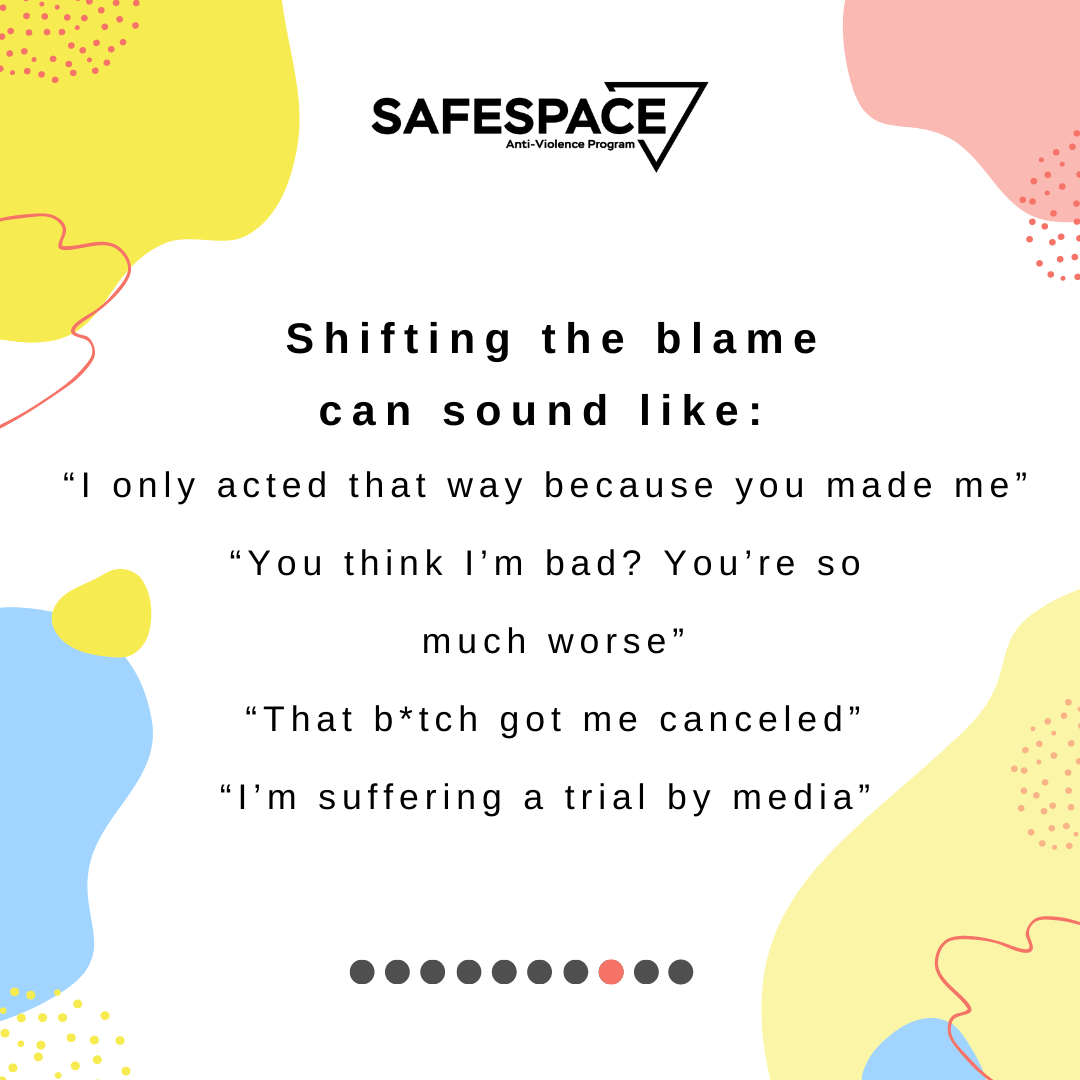 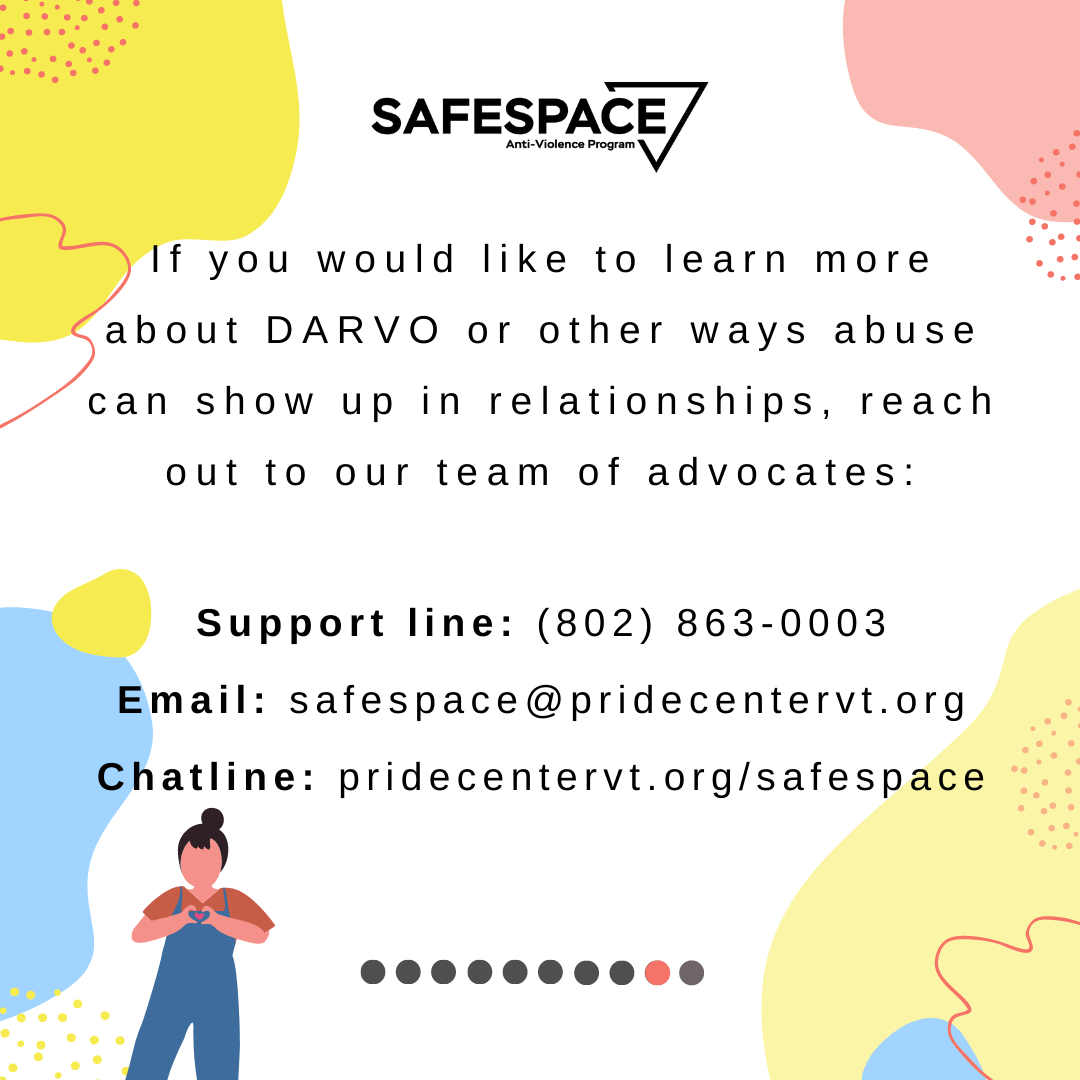 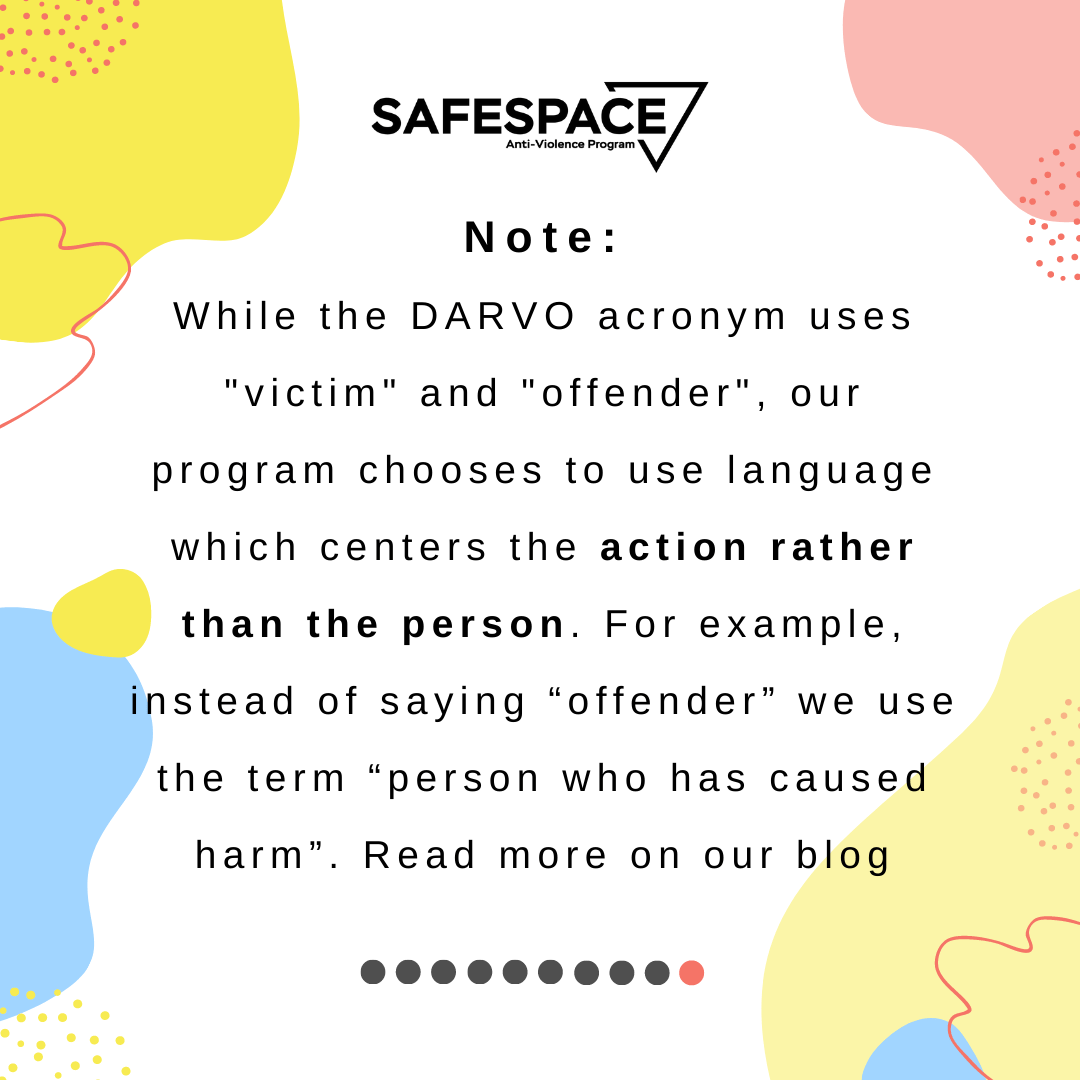