In the News: Vermont Has Endangered Transgender Prisoners. Change Is Coming — but Is It Enough? 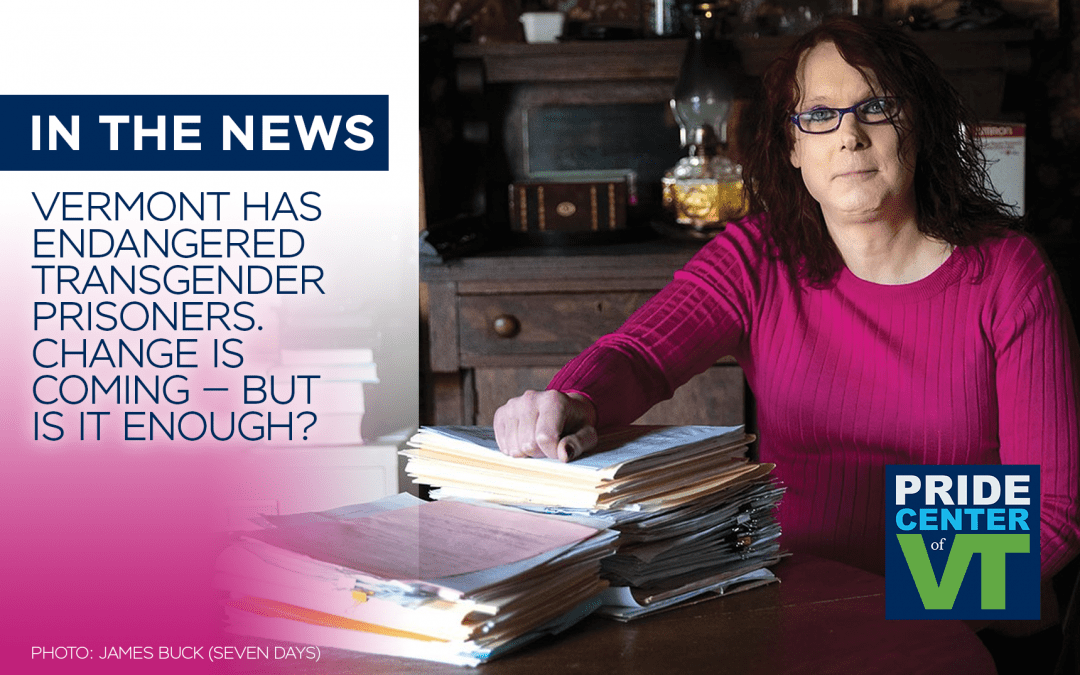 The following is an excerpt from Seven Days’ Vermont Has Endangered Transgender Prisoners. Change Is Coming — but Is It Enough? by Chelsea Edgar (4/28/21)

For Jasmine Klein, life in Vermont’s prisons has been a punishment beyond her sentence.

Last November, Klein, a transgender woman, was transferred to Chittenden Regional Correctional Facility, the state’s only prison for women, from Tallahatchie County Correctional Facility, a men’s prison in Mississippi, where Vermont sends some 170 members of its incarcerated population. In Tallahatchie, she said, a man drugged her and forced her to have sex with him, which made her feel so dehumanized that she attempted suicide.

Klein, who grew up in Rutland, has Asperger’s syndrome; in school, her peers bullied her for her disabilities and, as she got older, for being attracted to boys. Her grandmother was the only person in her family who didn’t make her feel ashamed of her sexuality. When Klein was 16, she said, her grandmother asked her if she felt like a woman. Klein was years away from coming out, but she still remembers how good it felt to be seen without judgment. “If my grandmother were still alive,” said Klein, “I probably wouldn’t be in jail today.”

In 2011, when she was 18, she and two friends broke into a laundromat in Rutland and stole $500 in quarters. “I was trying to fit in and show people that my sexuality didn’t define who I was,” she said. “I just wanted to be like all of them.” Klein, who still presented as male, was charged with burglary and served time at Marble Valley Regional Correctional Facility in Rutland. A year later, while Klein was out on community supervision, she got drunk at a party and had sex with a 14-year-old; in court filings, Klein said she hadn’t known his age. She was charged with sexually assaulting a minor and sentenced to 10 years in prison.

While Klein was awaiting her sentence in 2013, she became only the second person to come out as transgender at Southern State Correctional Facility in Springfield. The first, a transgender woman named Cammie Cameron, was a friend of Klein’s from Rutland. Klein said Cameron gave her the courage to come out. “I was scared, because I saw the way Cammie got treated,” Klein said. “But I knew that I had to, no matter what, because it felt worse to hide all the time.”

Klein’s fears came true. Prison staff constantly misgendered her; once, when she tried to correct a guard at Southern State, she said, he called her a “faggot.” She spent six years rotating among most of Vermont’s five men’s correctional facilities, an experience she described as “torture.” More than once, she said, she tried to kill herself.

At Chittenden Regional, Klein, now 28 and a year and a half away from her release date, hoped she would finally be treated with more respect. Instead, she said, she got the overwhelming message that she didn’t belong. Whenever one corrections officer in her housing unit thought Klein was out of earshot, she said, he would complain to residents that he was tired of having to watch his language around her and the other transgender women in the facility. More than one roommate told her that they didn’t want to live with “a trans.”

Then, in late February, Klein said, another roommate manipulated her into sex by threatening to tell an ex-boyfriend, whom she claimed was a Hells Angel, that Klein had raped her. “She told me that if I told any staff what happened, I wouldn’t be believed, because I’m trans,” Klein said.

In December 2019, Seven Days exposed a yearslong epidemic of sexual abuse and harassment of female employees and incarcerated women by male corrections officers at Chittenden Regional. But the mistreatment of transgender people in Vermont’s correctional system has garnered less attention. Of the roughly 1,200 people currently in custody, 15 are registered in the system as transgender; all of them are transgender women. In 2015, the Department of Corrections adopted a set of guidelines, called Directive 432.01, to establish standards for how corrections employees should interact with the transgender people in their care. These standards include using appropriate pronouns, providing clothing and hygiene products that match a person’s gender identity, and considering gender identity, not just sex at birth, when determining whether a transgender individual will be incarcerated with men or women.

But corrections employees have not always heeded those mandates. Current and former trans inmates, as well as advocates who work in Vermont’s prisons, say that transgender people in the state’s correctional system have been denied access to appropriate medical treatment and clothing, housed in dangerous situations, and subjected to insults from staff.

Most of this mistreatment happens within prison walls, hidden from public view. But in at least one instance, a corrections employee has used a social media platform to mock a transgender inmate. In July 2019, James Frank, an officer at Northwest State Correctional Facility in St. Albans, posted a rant on Facebook after his supervisors asked him to report to work a few hours early to monitor a transgender person on suicide watch. “Have to go in 4 hours early to sit and watch a he she who wants to hurt/kill self,” Frank’s post read. “SO sick of the LIBERAL BULLSHIT. I think it’s just a p-ssy that won’t do it anyway and needs attention.”

A supervisor at the prison heard about the post and reported it; Frank was placed on paid leave. After an internal investigation and a Vermont Labor Relations Board hearing, interim Corrections Commissioner Jim Baker fired Frank in December.

Baker became commissioner in late 2019, after his predecessor, Mike Touchette, resigned in the wake of the Seven Days investigation. In Baker’s view, the department’s handling of Frank represents a shift in the culture of corrections over the last few years, which mirrors the evolution in thinking about gender identity in society at large. “That someone would report the conduct of a coworker for the way they were speaking about a transgender individual is, in itself, a signal of change,” Baker said.

“I don’t think corrections reflects anything different than what the community reflects as people become more educated and sophisticated in the way they deal with individuals who don’t look like them,” he continued. “And my goal is for the staff to be more educated and sophisticated about the understanding of individuals that identify as transgender.”

Baker acknowledged that some corrections employees have displayed bigotry: “We have had individuals that maybe were homophobic, or maybe that were uneducated and unsophisticated,” he said. Since becoming commissioner, he said, he has telegraphed to the department’s 928 employees — administrators, prison staff, and probation and parole officers — that he won’t tolerate such behavior. Under his command, all employees have been required to complete implicit bias training; in October 2020, the department hired the Moss Group, a Washington, D.C.-based criminal justice consulting firm, to conduct an audit of all its practices and policies, including its protocols related to the care of transgender inmates.

Advocates applaud these steps toward improvement, but the realities of incarceration, they say, have already done irreparable harm to transgender people. “The Vermont Department of Corrections is light-years ahead of other states’ correctional systems in addressing the needs of trans folks, and light years behind where they could and should be,” said Kim Jordan, director of the SafeSpace Anti-Violence Program at the Pride Center of Vermont, which supports incarcerated survivors of sexual violence.

In the correctional system, she said, transgender people experience trauma every day. “No matter what kind of individualized support we can provide them, they go back to their units, where the corrections officers might misgender them, deadname them” — refer to them by their former name — “remove their gender-affirming underwear and hygiene products, degrade them, and demean them,” said Jordan. “That is violence.”

She looks slightly askance at the department’s recent efforts to treat the incarcerated transgender population with greater dignity and respect. “They don’t want any more legal problems,” she said. “But if the collateral impact of them protecting themselves is that no more harm comes to people, then yes, please.”

To read the full story on Seven Days, click here >