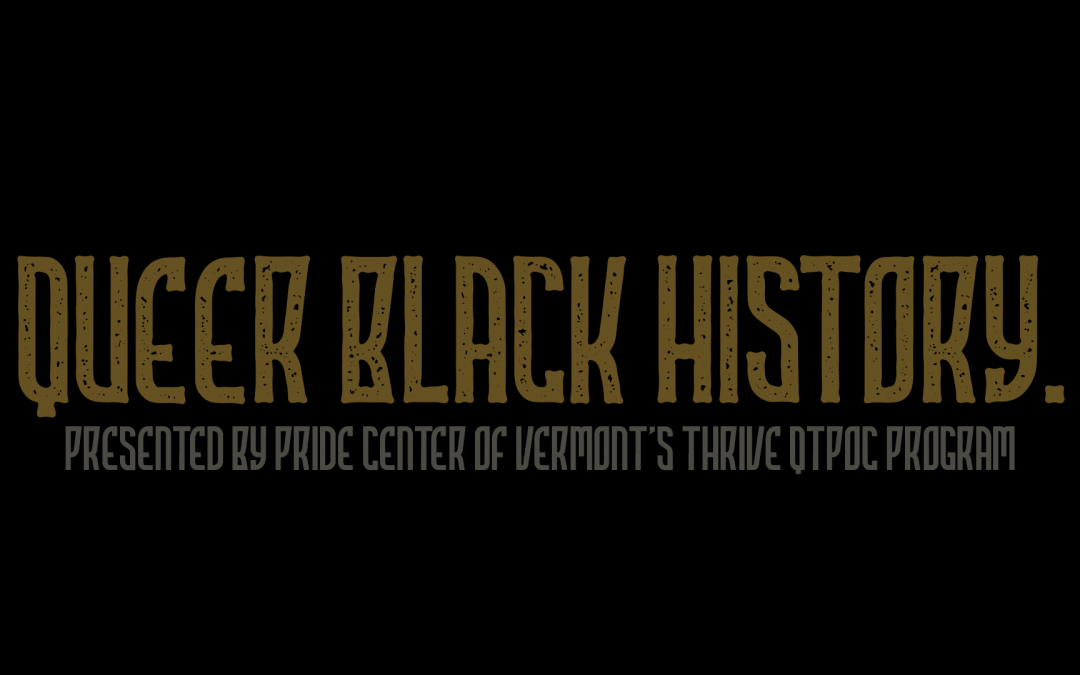 Every Monday, Wednesday, and Friday for the month of February, we will be highlighting another Black LGBTQ+ icon on Facebook, Instagram (@thrivepcvt), and here on this blog post! Check back in each week for updates and remember to support Black LGBTQ+ people (personally and financially) every day!!! 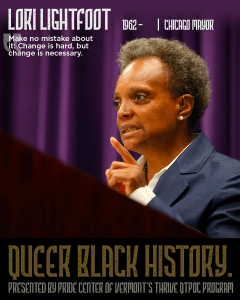 “Make no mistake about it: Change is hard, but change is necessary.”

Lori Lightfoot made history in 2019 by being elected the first out LGBTQ mayor of Chicago, the nation’s third-largest city. Lightfoot is not only the first lesbian to hold the post, but she’s also the first African-American woman to do so. Lightfoot was a lawyer and longtime community activist before becoming mayor. Notably, she served on a police oversight board that delivered a scathing report on misconduct by law enforcement. Police reform remains one of her priorities, and she has proposed an ordinance providing for more civilian review over law enforcement. Another of her goals is spreading prosperity throughout the city. 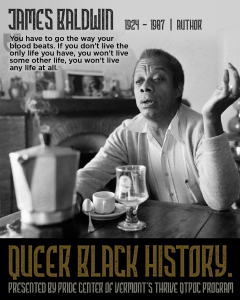 American writer and activist, known for novels such as Go Tell It on the Mountain and essays such as Notes of a Native Son. His fiction is admired for its complex views on racial, sexual, and religious identities, informed by his own homosexuality and his childhood in Harlem. He also wrote a number of articles about turmoil in the south, putting him at the forefront of the Civil Rights Movement. But although he often wrote about African American experiences, he refused to be labeled as just a black author. His 1956 novel, Giovanni’s Room, surprised readers with its white protagonists as well as its frank depictions of homosexuality. And his subsequent novels often featured a mix of characters who were black, white, straight, and queer. 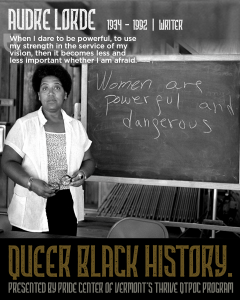 “When I dare to be powerful, to use my strength in the service of my vision, then it becomes less and less important whether I am afraid.”

Audre Lorde was a writer and activist whose feminism pushed back against society’s tendency for categorization. Her activism was deeply intersectional, her writing multi-genre. She embraced differences within individuals and within communities, believing that we are interdependent and better for our complexities. 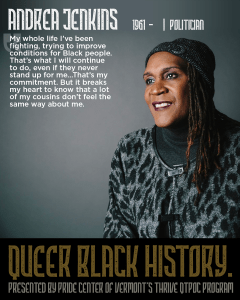 “My whole life I’ve been fighting, trying to improve conditions for Black people. That’s what I will continue to do, even if they never stand up for me…That’s my commitment. But it breaks my heart to know that a lot of my cousins don’t feel the same way about me.”

Andrea Jenkins is a writer, performance artist, poet, and transgender activist. She is the first African American openly trans woman to be elected to office in the United States. Jenkins moved to Minnesota to attend the University of Minnesota in 1979. She worked as a Vocational Counselor for Hennepin County government, for a decade. Jenkins worked as a staff member on the Minneapolis City Council for 12 years before beginning work as curator of the Transgender Oral History Project at the University of Minnesota’s Jean-Nickolaus Tretter Collection in Gay, Lesbian, Bisexual and Transgender Studies. 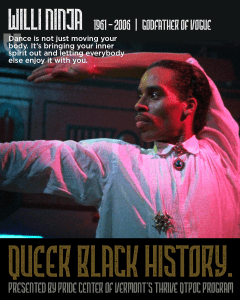 “Dance is not just moving your body. It’s bringing your inner spirit out and letting everybody else enjoy it with you.”

Willi Ninja never lost touch with the drag ball scene. He was instrumental in getting the ballroom scene to discuss HIV/AIDS prevention throughout the 1980s when it was not being talked about in the gay community because of social stigma and anxiety surrounding it, making it a habit to split time between performing and community engagement. He was diagnosed with HIV in 2003 and continued working to support his elderly mother while not being able to afford healthcare for himself[10]. He continued to mentor upcoming dancers and models until he lost his sight and became paralyzed. Willi Ninja died of AIDS-related heart failure in New York City in 2006 at age of 46 surrounded by the children of his house. He continued to provide an outlet for self-expression in the queer community until the end. 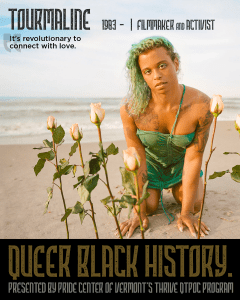 “It’s revolutionary to connect with love.”

Tourmaline is an activist, filmmaker, and writer. Her work highlights the capacity of Black queer and trans people and communities to make and transform worlds. In her films, Tourmaline creates dreamlike portraits of people whose stories tell the history of New York City, including gay and trans liberation activists, drag queens, and queer icons Marsha P. Johnson and Sylvia Rivera (Happy Birthday Marsha, co-directed with Sasha Wortzel, 2018), Miss Major (The Personal Things, 2016), and Egyptt LaBeija (Atlantic is a Sea of Bones, 2017). Tending to the histories and haunts of disabled, poor, Black, queer, and trans life that echo and vibrate beneath neighborhoods and cultural landmarks, Tourmaline’s films undulate between narrative and non-narrative and illuminate the mundane acts that form the fabric of historical events and mutually supportive communities. 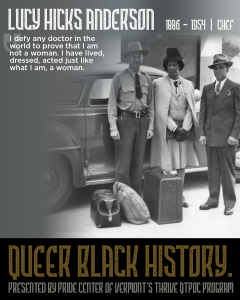 “I defy any doctor in the world to prove that I am not a woman. I have lived, dressed, acted just like what I am, a woman.”

Lucy Hicks Anderson was a Kentucky-born chef, socialite, and entrepreneur who fought for her right to live as her full self in a time when society and the law were against her. As a child, she knew herself to be a woman and transitioned early, changed her name, and lived as a woman for the rest of her days with the support of family and doctors. After years of working and saving up her money, she opened a boarding house and brothel in Oxnard, CA and became one of the most influential socialites in the community. In 1945, she was tried and detained for living as a woman and having married twice and after her imprisonment, moved to Los Angeles with her second husband. 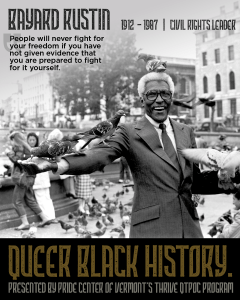 “People will never fight for your freedom if you have not given evidence that you are prepared to fight for it yourself.”

Rustin’s work has reentered the Black and queer consciousness in recent years, as many Black religious spaces seek to rectify their relationship with their LGBTQ+ members. Slowly emerging from the shadows of a movement he buttressed, Rustin remains an inalienable figure of resolve, hope, and integrity.

Learn more about his legacy here! 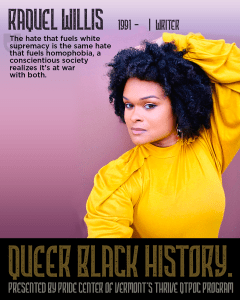 Raquel Willis is a Black transgender activist, award-winning writer, and media strategist dedicated to elevating the dignity of marginalized people, particularly Black transgender people. She has held ground-breaking posts throughout her career including director of communications for the Ms. Foundation, executive editor of Out magazine, and national organizer for Transgender Law Center (TLC). 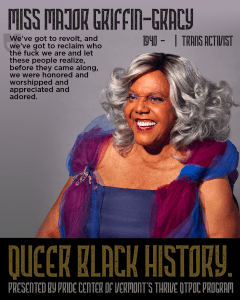 “We’ve got to revolt, and we’ve got to reclaim who the fuck we are and let these people realize, before they came along, we were honored and worshipped and appreciated and adored.”

Miss Major Griffin-Gracy is a legendary trans rights activist. As a veteran of the Stonewall uprising, Miss Major has been fighting for trans and queer liberation for over half-a-century. One of our living legends, Miss Major continues to work and fight for the rights and liberation of Black trans people, working tirelessly to connect incarcerated trans women to resources and community, as well as creating space for trans women of color. She is the founder and leader several organizations such as House of GG, an organization with the focus on “supporting and nurturing the leadership of Transgender women of color living in the U.S. South”. Keep up to date with her on social media and support her Fundly campaign if you can! 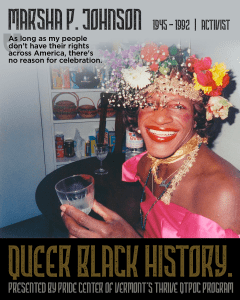 “As long as my people don’t have their rights across America, there’s no reason for celebration.”

Marsha P. Johnson — who would cheekily tell people the “P” stood for “pay it no mind” — was an outspoken transgender rights activist and is reported to be one of the central figures of the historic Stonewall uprising of 1969. Along with fellow trans activist Sylvia Rivera, Johnson helped form Street Transgender Action Revolutionaries (STAR), a radical political organization that provided housing and other forms of support to homeless queer youth and sex workers in Manhattan. She also performed with the drag performance troupe Hot Peaches from 1972 through the ‘90s and was an AIDS activist with AIDS Coalition to Unleash Power (ACT UP). 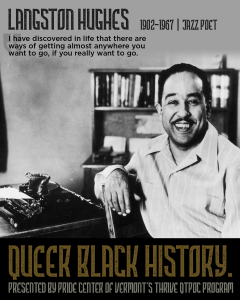 “I have discovered in life that there are ways of getting almost anywhere you want to go, if you really want to go.”

A leading force in the Harlem Renaissance, a poet, a scholar, an activist, and a black man, Hughes spoke unashamedly of his experiences with racism in a still heavily segregated America. In his most obvious queer works, he does not align himself with queerness but rather shows his support for the queer community. Despite the community of relative support he was surrounded with, Langston Hughes never came out himself. This may have been out of concern for his safety, but other possible reasons can be found in his writing. While Hughes didn’t have the words to explain all his experiences, he had always lived through the philosophy of using words to connect people.