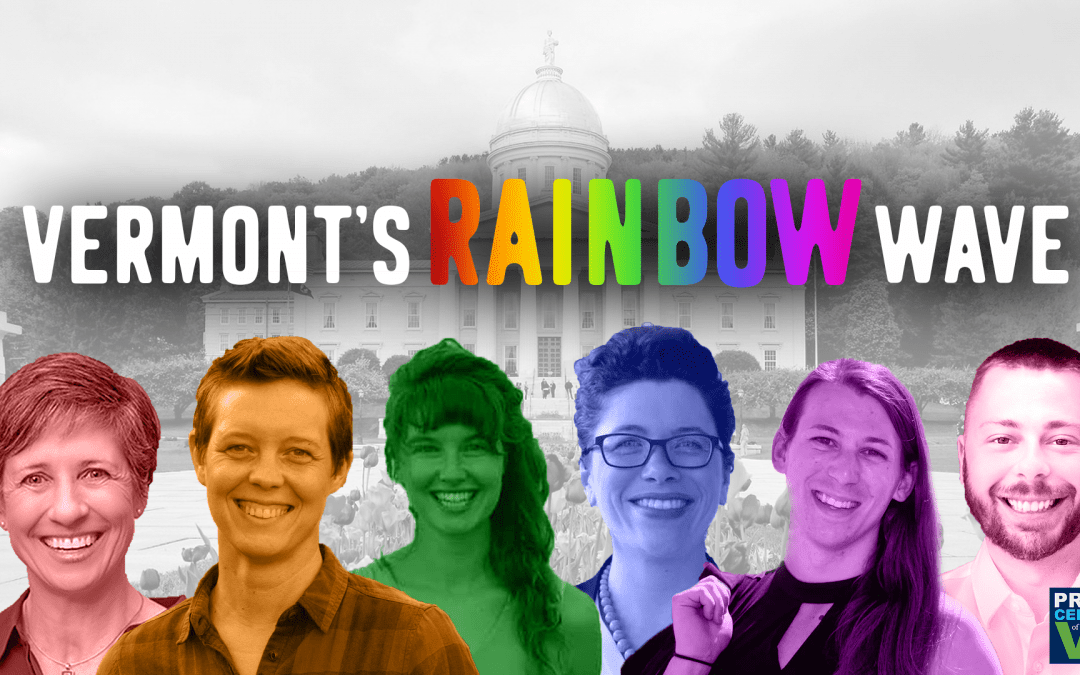 While we anxiously await the results to trickle in across the United States, here in the Green Mountains, we have cause for celebration with our very own Rainbow Wave. Our polling officials were diligent in getting all the votes counted in a timely manner. In all, Vermont welcomes 6 new LGBTQ members to the House of Representatives in Montpelier, more than doubling its representation.

LGBTQ Senators in Vermont will decrease from three to two. Incumbents Becca Balint (D-Windham) and Brian Campion (D-Bennington) won re-election. Senator Debbie Ingram (D-Chittenden) stepped down to run for Lieutenant Governor but was unsuccessful in the Primary Election.

Three LGBTQ candidates that led impressive campaigns but were ultimately not elected in  Vermont this year are Jamie Dufour (D-Manchester Center), David Glidden (D-Saint Albans), and Ember Quinn (D-Milton). Montpelier will now hold 11 out LGBTQ House Representatives and 2 out LGBTQ Senators beginning in January, with representation from six counties. We collectively feel that Vermont is only stronger with the added queer and trans representation in the statehouse.

The news of Vermont’s Rainbow Wave hit close to home as many Pride Center of Vermont team members rolled up their sleeves and practiced their civic duty, off-the-clock. As mentioned, Taylor Small, our director of health and wellness, was elected as State Representative in Winooski. Anne Moyerbrailean, our SafeSpace advocate who ran for Justice of the Peace in Winooski (still awaiting results), volunteered to take calls on Election Day on the National Voter Protection Hotline, answering any and all questions and concerns related to voting. Hotline volunteers can do everything from check someone’s polling place to resolving issues at polling stations or administer provisional ballots. Gustavo Mercado Muñiz, our transgender program coordinator, also assisted on the hotline, providing Spanish-language support. Justin Marsh, director of communications and development, worked on the campaign trail with Taylor Small and Kesha Ram (Vermont’s first woman of color in the state Senate) and won their election for Justice of the Peace in Cambridge. Richard Elliott, health and wellness coordinator, used their drag persona, Rhedd Rhumm, to get out the vote in their home state of New Jersey.

But we also know that LGBTQ+ liberation and eliminating white supremacy does not begin and end at the ballot box. Multiple reports demonstrated voter suppression in all corners of the U.S. targeting those most marginalized and most likely to stand up against hate. Despite increased turnout, it is disheartening to see so many Americans voting against basic human rights. Our work continues as we mobilize within our communities, center the voices of those most impacted, and advocate to improve the lives of LGBTQ+ Vermonters.

Elections often bring anxiety, fear, contemplation, and a general unease. Other times they bring a fierce celebration of victory or relief. One thing we know with certainty: being present and addressing the needs of yourself and your community members is of the utmost importance. Please use this time to reach out to your friends and family members. Please join us in sharing your self-care practices on our social media accounts, where our team will also share their tips and tricks. We will be extending our Daily Virtual Gatherings to start 30 minutes earlier (5pm Monday through Thursday, 1pm Friday) for additional time to drop-in and be in community. Stop by to talk about what’s on your mind or how you’re navigating through this era.

Finally, we want to thank the 2020 LGBTQ candidates for bravely and boldly stepping up to serve their communities. It takes an immense amount of courage, time, and resources to devote to running, and regardless of the ultimate outcomes, the sheer visibility of your identity and perseverance is meaningful to many. Thank you all for your courageous leadership by actively engaging in our democracy.