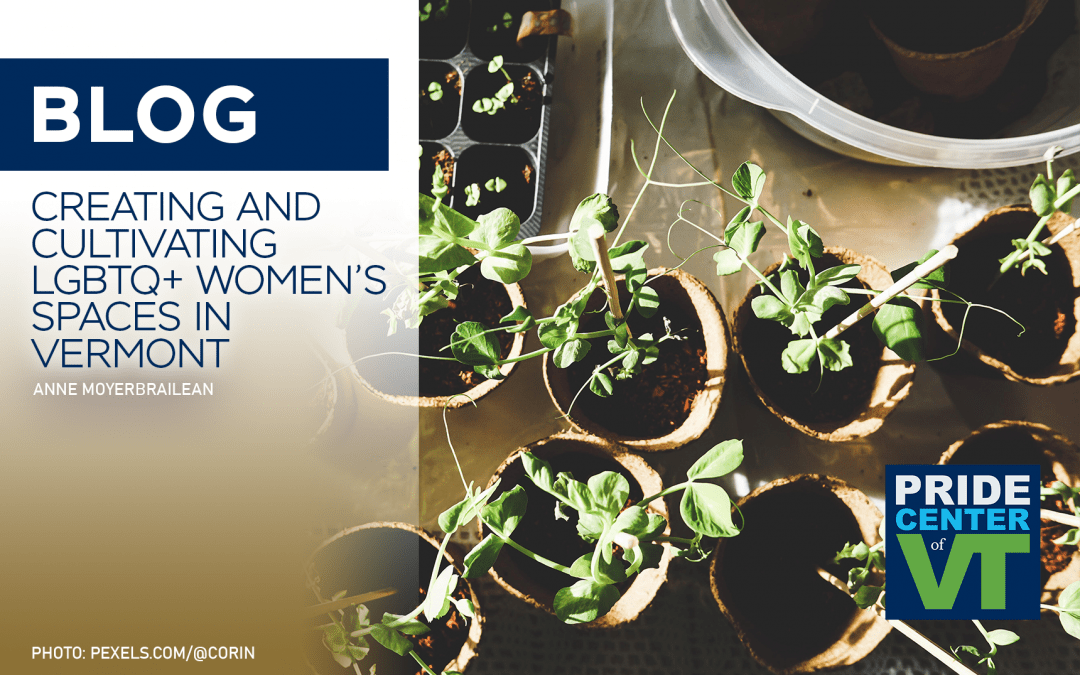 I’m often frustrated by the lack of inclusive LGBTQ+ women’s spaces in Vermont and beyond. What I see and what feedback I receive is that there are not enough spaces specifically for LGBTQ+ women in Vermont – and the spaces that do exist are either closing or unable to sustain for a number of reasons. This is feedback that Pride Center of Vermont has also received from community so, in 2019, Taylor Small and I started the Glow program.

Glow is Pride Center of Vermont’s inclusive social program for LGBTQ+ women and community members who are women-aligned. We use the language ‘women-aligned’ to signal that Glow is also a program for people who identify outside of the gender binary (e.g. non-binary, gender fluid, agender, etc.) and who feel a connection to and/or alignment with LGBTQ+ women. Taylor and I have spent a lot of time considering how to make our spaces as inclusive as possible, while also holding on to our belief in the importance of affinity spaces, or spaces by and for specific identity groups.

I know these conversations and struggles are not unique to Vermont, which is why I was so grateful that All We’ve Got filmmaker, Alexis Clements, reached out to the Pride Center proposing a documentary screening and panel discussion. Alexis’ documentary beautifully captures many of the conversations about LGBTQ+ women’s spaces that Taylor and I have had with each other and within community; All We’ve Got  explores these conversations about the desire for, the decline in, and the importance of cultivating the LGBTQ+ women’s spaces in communities from San Antonio, Texas to New York City, New York.

If you are interested in watching the documentary, Pride Center is offering free viewings of the documentary through October 8th, 2020. More details can be found here

For Pride Week Alexis, along with local activists, Anne Charles and Catarina Campbell, joined Taylor and myself for a discussion about cultivating, creating, and transforming LGBTQ+ women’s spaces. In this round table discussion, we explored questions like:

If you’re interested in the full conversation, a recording of the event can be found here:

Discussion group for LGBTQ+ women who live in Central Vermont (the geographical constraints have expanded slightly since this group is currently virtual). People can learn more on the Facebook page Rainbow Umbrella of Central Vermont or can email the group organizer, Anne Charles, at womendiscuss@gmail.com

On the 2nd & 4th Thursday of the month from 7-9 pm, Out in the Open hosts Trans Femme Chill Space (currently virtual during the pandemic). Learn more about their events here

Huntington Open Women’s Land (HOWL) is a ” non-profit organization held in perpetuity for all women, guided by a collective, nurtured by residents and rejuvenated by visitors, all the while striving to form an intentional community on the land”. HOWL welcomes overnight visitors and hosts a variety of events. To learn more about HOWL and their events, check out their website

Know of a program that isn’t included on this list? Email glow@pridecentervt.org and we’ll update the list!

*We want to thank Women Make Movies (WMM) and Alexis Clements for making this event possible. We would also like to thank guest panelists, Anne Charles and Catarina Campbell, for their time and activism in our state.