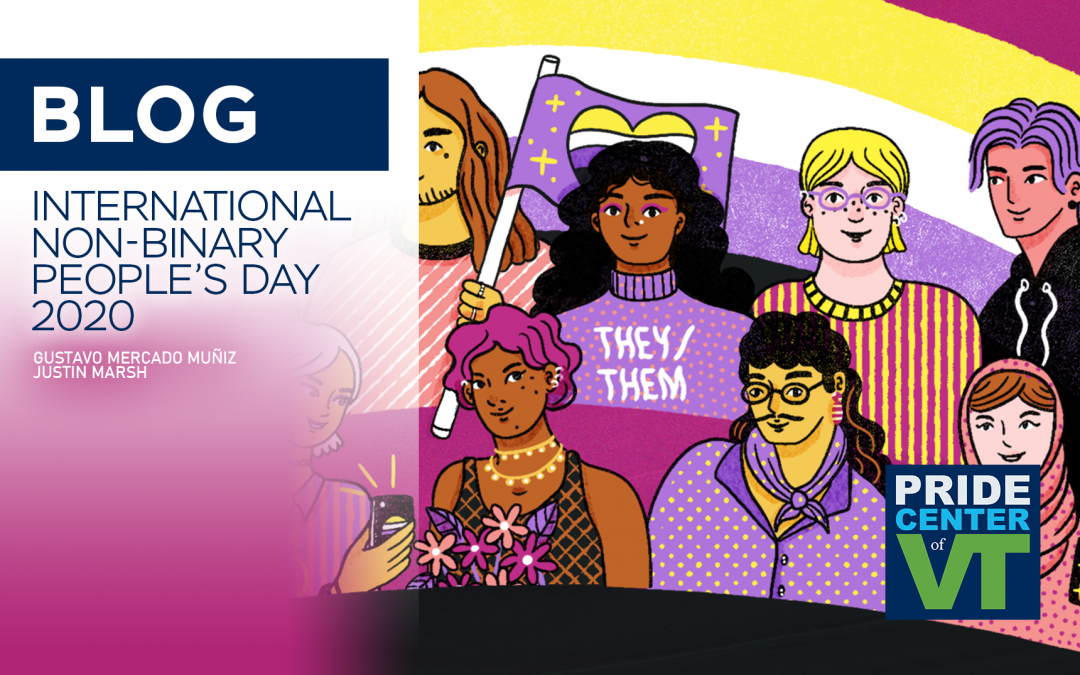 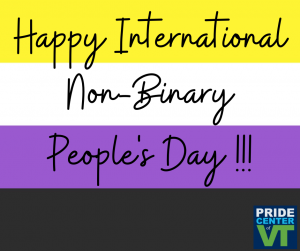 To all of the folks who identify under the non-binary umbrella, HAPPY INTERNATIONAL NON-BINARY PEOPLE’S DAY

Since 2012, July 14th has been recognized around the world as Non-Binary People’s Day! This day was established as a way to honor and celebrate non-binary people and the beauty of the differences in non-binary identities across cultures.

As we know here in the US, our society and our government continue to limit our view of gender and keep it within a binary, but those of us who are non-binary (or who love and care about non-binary people) have been pushing the boundaries of binary gender since the dawn of time, and will continue to do so until we live in a world that respects all people’s gender! Here in Vermont, we have taken strides to honor and legally protect non-binary people and recognize our gender on our identification documents, and PCVT will continue this fight alongside non-binary folks for as long as we need to! 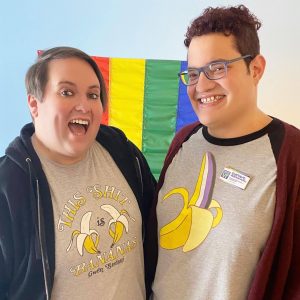 Justin and Gustavo rocking their matching banana tees (and look at Gus’s enby pride, too!)

In honor of International Non-Binary People’s Day, Justin and Gustavo wanted to share some thoughts about their identities as non-binary people and what non-binary visibility means to them.

Non-binary visibility is essential. I grew up in Puerto Rico with a native language (Spanish) that is steeped in the gender binary and in a society that held very firmly to the idea that to raise your children right meant to have the boys playing sports and practicing manliness and have the girls in the arts (primarily dance and music) and making sure they knew how to keep a house. I knew from an early age that I wasn’t really a man but I also wasn’t a woman but had no language for this identity and I let myself be put into the man box because it was the only real option I had if I wasn’t a woman. My first memory of gender is from when I was 7 years old and watched Brandy and Whitney Houston’s version of Cinderella with a substitute teacher at school. I saw Whitney Houston as the fairy godmother flutter about in this amazing gold, sparkly gown with a flowing cape, and immediately knew I needed one of those. I came home that day and wrapped myself in a yellow bed sheet and pranced around my room butchering the lyrics to the songs, but I was living my best life! My mom came home early that day and when she saw me, laughed and gently told me that that was a “girl thing” and boys don’t do that. I stared at her blankly and remember wondering how that applied to me and then realizing I was seen as a boy. From then on, I kept pushing gender boundaries and being told to be more like a boy, until I found myself imitating that to avoid the hassle. As a Puerto Rican kid, I had no idea that there was more out there for me.

In college, I made friends who identified at non-binary but at the time, all those friends were white and from the states, so I genuinely believed this wasn’t something I could access. I was 22 when I met the new person hired to work where I did my student job, and they were a Latinx non-binary person who used they/them pronouns! I had thought that was impossible. For months I found myself hearing their stories and thinking about how much my own experiences reflected in theirs. I would have never realized that I was non-binary had I not met my mentor, and I know that that is the case for so many non-binary BIPOC who grow up without non-binary representation, and even when we see some in media, it doesn’t look like us or have our cultural experiences so we can’t see that identity fitting us as well. Finding the language for my gender in the word “non-binary” was an amazing experience! To me, being non-binary is beautifully freeing, and lets me express and explore myself in relation to the world outside of gender expectations. I know that others will push expectations onto me and over time I have come to realize that that’s their own issue to work through. I cannot apologize for being me, I cannot go back to molding myself into the person other people want me to be, and I want to commit myself to be more fully and unapologetically my magical non-binary self!

I have since then come into my own identity and shared it with my bio and chosen family and friends, and I refuse to let anyone else dictate how I present myself. I jokingly tell folks that I get paid to be trans, and I do have that amazing honor to work on behalf of trans and non-binary folks every day. I can be my full self in my apartment full of non-binary people, and my work celebrates my identities. Under normal circumstances, Justin and I share an office and get to bond over non-binary things all the time. My abuela complimented my nail polish last time I was home, my cousin came out to me as non-binary when she saw me be my queer self with the family, and more and more people I grew up with have shared similar stories with me. I want to help other BIPOC whose genders don’t fit into their community’s binary understandings of gender embrace themselves and connect folks to resources that will help them achieve that gender euphoria I feel walking down the street in a flowy cape and wearing the non-binary flag on my chest at Pride. I’m sending so much love to all the non-binary folks reading this. You’re not alone, we are not new to the world, and we will be here long after people who doubt us!

Justin, our Director of Communications and Development (they/them pronouns):

Growing up in rural Vermont on a dairy farm taught me that essentially “men do (farm) chores” and “women cook and clean” – and as children, my brother and I were supposed to keep up with that mentality. It was easy for my brother, who didn’t mind helping split wood, tap maple trees, and just hang out on the farm with my father, uncle, and grandfather. I was always a bit different, opting to explore beyond the societal expectations, seeping into the arts, cooking, and writing. I always embraced the feminine, surrounding myself with their music, their knowledge, their energy. And eventually, in high school, I felt comfortable enough to embrace that in myself. When I knew I had enough time to wash it off before seeing my parents, I’d swipe on some eyeliner or eyeshadow. Not only did I feel like I looked better, but I felt better too. This would continue on throughout my life, but I shed the fear of what others would think of me, becoming emboldened to wear it proudly. Painting my nails, wearing dangly earrings, floral perfumes, and my signature eye makeup just became a part of me. I can recall countless times I would be asked, usually by young children, ‘are you a boy or a girl?’ It used to make me cringe to have to answer them, but the more it happened, the more power I took in those moments. “What do you think I am?” “Why do you think that?” Little did I know, I was breaking down gender stereotypes and forcing them to actually explain their questioning and curiosity. Ten years ago, I didn’t know it was possible to be non-binary. I would get questions from friends and family, asking if I was going to transition. It never felt like a strong desire of mine to do so. But when I said ‘no’ I could sense they didn’t believe me, because the concept of being non-binary was such an unknown one (and in many ways, still is).

I revel in our progress, widely as a society, and also from just within my family. My brother’s children see me as their “Juji” and never balk at my appearance. They compliment my nail color or sometimes my glittery eyes. They tell me they like my shoes (really, they’re just a major ego boost – 10/10 recommend having niblings). This tells me that they see me not as a ‘boy’ or a ‘girl’ but just as their Juji. I’m presenting to them a freer world, not constricted by gender guidelines, where maybe they will feel comfortable exploring gender one day, or at least not questioning it when they see gender exploration out in the world.

I’ve never shed those layers of myself, but I have made them smaller to feel comfortable in certain spaces and to avoid the awkwardness and gawking. The older I get, the less I care. I am unapologetically me. Take me as I am. I am so happy to work in a space where my body and my presentation are respected and never questioned. Where the work we do together is meant to uplift those who have felt the way I have. To make it easier for them to exist. To show them that it’s okay to be your authentic self without forfeiting your happiness. My pledge to myself this Non-Binary People’s Day is to be more assertive of my pronouns – to not shrink back and accept he/him just to avoid the awkwardness. Not so much just for me, but for all of us who can’t be boxed in by a binary system. 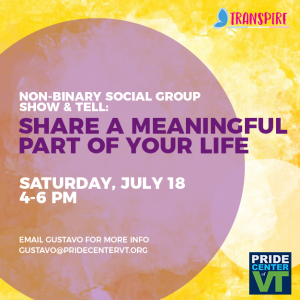 Early last year, we launched a Non-Binary Social Group as a way for non-binary folks to come together and celebrate each other over tea, board games, food, and fun conversations! The group is open to any and all people who identify outside of the gender binary, including folks who think they might be non-binary but are unsure. To be connected with the group, email gustavo@pridecentervt.org! We have an exciting Show & Tell event this weekend we’d love to have you take part in.

For any non-binary folks looking for support, we have a Trans & GNC Support Group that meets twice a month and includes non-binary people! See our calendar for the dates of the Support Group, or email gustavo@pridecentervt.org to chat more about this.

We invite any non-binary folks reading this to share anything they would like to about being non-binary in the comments!