The following includes an excerpt from Seven Days

Carol “Crow” Cohen (1943-2015) moved to Richmond, VT with her family in 1974. That year, shortly after giving birth to her second daughter, she dialed the local “Women’s Switchboard.” A hybrid rape crisis hotline and general women’s network, it was listed in the phone book. “Because Vermont is so small,” Cohen wrote in her 2010 memoir Small Town Revolution, “I asked if there were any feminists in Richmond.”

Cohen was in luck: She was directed to the doorstep of “Raven,” a woman well connected with the burgeoning lesbian scene and feminist community that congregated in Burlington. Thus began Cohen’s process of coming out and self-discovery, one narrative among many that define the women’s movement of the era.

The late seventies and eighties were a period of tremendous activism, as the Burlington women’s community took part in the creation of such institutions as the Battered Women’s shelter, Women’s Studies departments, women’s health clinics, and the like. A new and more authentic identity and way of being emerged, accompanied by a new self-given name: Crow.

Her memoir, Small Town Revolution, recounts her experiences in women’s communities, political groups, and the peace movement and her connection to the profound cultural changes of the era that would shape her remaining years, in particular the Women’s Movement. After coming out, she became a part of many radical lesbian, LGBTQ, and activist groups in Vermont throughout her life. She was one of the founding members of Huntington Open Women’s Land and lived in Israel for several years. 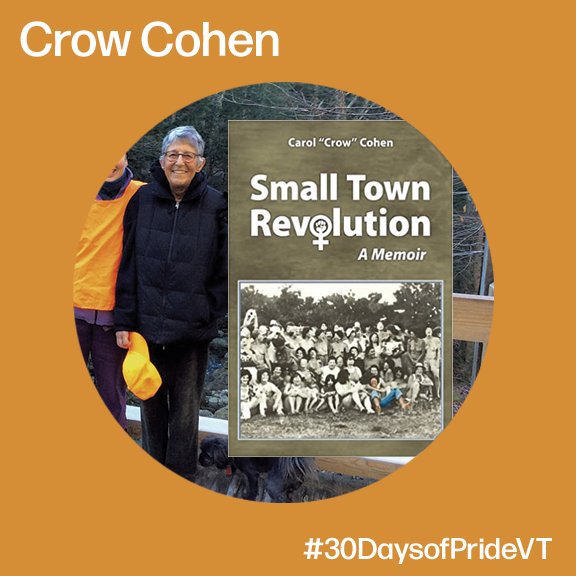