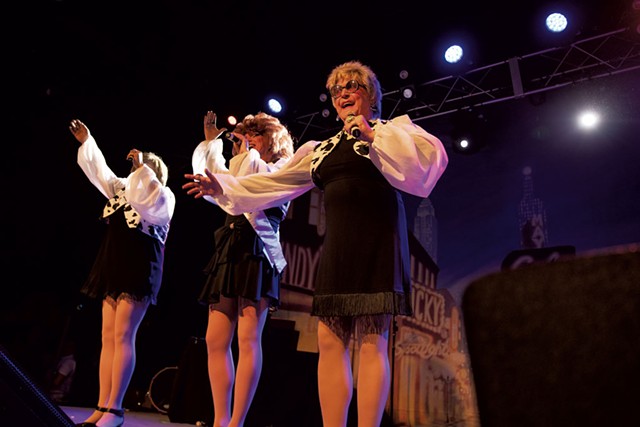 If you had told Bob Bolyard in 1995 that he’d still be planning and pulling off the wildest party of the winter in 2020, he would have had some choice words for you. For example, “‘You lie!'” Bolyard says, laughing. “Or maybe ‘Wasn’t there anything better to do?'”

Yet here’s the dirty truth: When the curtain goes up on the annual Winter Is a Drag Ball this Saturday, February 15, at Higher Ground Ballroom and Showcase Lounge in South Burlington, it will mark the 25th consecutive year that Bolyard and his acclaimed local drag troupe, the House of LeMay, have hosted the bawdy bacchanalia. This year’s theme is the “Silver Jubilee to Be Who You Be,” a nod to the event’s silver anniversary.

“Nothing lasts that long,” Bolyard, aka drag queen Amber LeMay, continues. Two other major local winter events were founded in 1995, he notes: the Magic Hat Mardi Gras parade, which has since been reworked into a parade-less celebration; and the Burlington Penguin Plunge, which celebrated its 25th anniversary on February 1.

“I’ve often wondered what was going on that year that those three events started within a month of each other,” Bolyard says. (Ahem: Seven Days launched in 1995, too.)

The first two or three Drag Balls were held at Memorial Auditorium in Burlington and primarily organized by Chris Mose and Roger Mapes, aka drag queen Rev. Yolanda, now based in New York City.

“It was just a unique event,” Bolyard recalls. “Who knew it would become an annual thing?”

After Memorial, the Drag Ball moved to the original Higher Ground in Winooski, then relocated again when the club opened its current Williston Road location. Despite the change of scenery, Bolyard says, the party has remained essentially the same for the past quarter century.

“You don’t want to change a good thing just to change it,” he observes.

That doesn’t mean it can’t be bigger. Taking advantage of both rooms at Higher Ground has allowed Bolyard to expand the ball’s entertainment offerings. This year’s slate is chock-full of live performances. These include the return of Rev. Yolanda, performing her “Alien or Angel?” show and new material from an upcoming album; a Lip Sync-Off hosted by drag king Mike Oxready; DJ sets by Craig Mitchell; and dance performances by Swan Dojo, the Champlain College Dance Team, the Catamount Dance Crew and the S1K Dancers.

The evening also features numerous drag performances and a sneak preview of the upcoming science-fiction musical Saucy Jack and the Space Vixens, which will open at ArtsRiot in March. As always, the party concludes with a costume parade and the coronation of the drag king and queen.

This year’s Drag Ball will celebrate a name change for the organization it has long benefitted, the Vermont People With AIDS Coalition. As of February 15, the nonprofit will be known as the Vermont Positive Living Coalition.

“The No. 1 motto from the very beginning is ‘Whatever drag is to you.'”BOB BOLYARD, AKA AMBER LEMAY

According to coalition executive director David Schein, the group’s rebranding is in line with a national trend among HIV/AIDS organizations. Most of them were founded in the 1980s and ’90s, he notes, when the disease carried a much heavier stigma and a high mortality rate. Since then, advances in treatment have greatly improved the quality and length of life for those diagnosed. In fact, the very definition of AIDS has changed to refer only to those with stage 3 HIV.

“It’s not the death sentence it used to be,” Schein says. “And a whole new generation of younger people with HIV are living in a different reality.”

The coalition works with a broad spectrum of people living with HIV and AIDS and their families and friends. The goal of the name change, which Schein says was initiated primarily by younger members of the Pride Center of Vermont who sit on the coalition board, is to reflect the entirety of that community, not just those with AIDS.

“It’s important that we continue to represent younger people with HIV in the state,” Schein says. “Because that would be a drag for the younger folks.”

“The face of HIV has changed drastically in the 40 years since the AIDS epidemic began,” coalition board member Johnny Chagnon concurs. He’s the health and wellness coordinator of the Pride Center and has worked with several AIDS service organizations. “So the way we came up with the name was focusing on people living with the virus and their whole wellbeing, as opposed to HIV itself.”

Both Chagnon and Schein note that not everyone in the HIV/AIDS community supported the name change.

“There was so much work to destigmatize that word, AIDS, back in the ’80s, that people have really held on to it, especially if they were there,” Chagnon says. “I think the thing we really need to recognize is that most people are not advancing to that final third stage of HIV, which is AIDS.”

Gagnon is also a drag performer, part of a troupe called the Haus of STDs, which uses drag routines to educate about sexually transmitted diseases. Chagnon’s stage persona is Giardia B. Other members have similar STD-themed monikers, such as H.P. Vera, Lady Donna Rhea and Sir Phillis.

Under any name, Schein says that the support from the Drag Ball has been crucial to the coalition. “It’s raised half our budget, almost,” he says. “It’s meant our utter survival.”

That, too, is likely to continue.

“We don’t have the resources to give financially to organizations and to causes, but we do have the opportunity to lend our skills and talents to raise awareness and funds,” Bolyard says. “As long as I can do that, I’m gonna keep doing it.”

That just leaves one question: What to wear?

“The No. 1 motto from the very beginning is ‘Whatever drag is to you,'” Bolyard advises. “Everyone has that one outfit in their closet that they always want to wear but never have the opportunity to. This is the opportunity to wear it.”