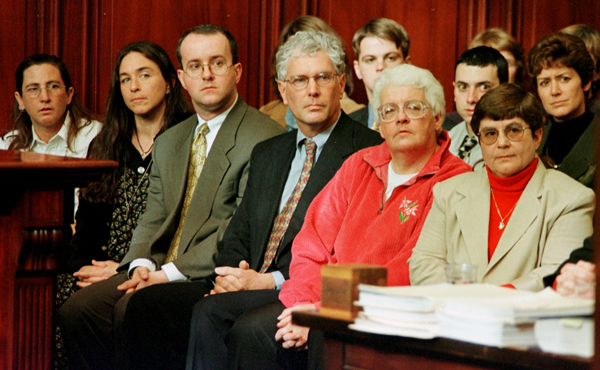 Pride Center of Vermont will host an event to celebrate the 20th anniversary of civil unions. The event will be held on Friday, December 13th at The BCA Center on Church Street at 6:00pm.

The Baker v. Vermont legal victory occurred on December 20, 1999, making Vermont the first state in the country to allow civil unions for same-sex couples. The decision would lay the groundwork for Vermont’s passing of marriage equality in 2009, the first in the nation to be done through the legislature and without a court ruling.

The 20th-anniversary event will include a program with special guests including plaintiff Stannard Baker, litigator Susan Murray, and State Representative Bill Lippert, among others.

“This event signifies the power of community in creating and impacting social change,” said Mike Bensel, Executive Director of Pride Center of Vermont. “Given the current political climate, this anniversary provides us the chance to reflect on the progress that’s been made, the people who got us there, and the protections we’re afforded in our brave little state.”

The event will raise funds for Pride Center of Vermont to continue its work and support for LGBTQ+ Vermonters. The organization’s programs include Health & Wellness, Safespace Anti-Violence, and programs for distinct populations such as transgender people, women, QTPOC (queer and trans people of color), and people with disabilities. Their programming extends to support people living with HIV, and programs supporting risk reduction and sobriety.

The event is sponsored by Langrock Sperry & Wool, LLP, Retina Center of Vermont, and Kohn Rath Danon Lynch & Scharf, LLP. Tickets are $25 and can be purchased at the event or ahead of time at pridecentervt.org/events/baker.